When my husband and I were first married, I attempted to make my grandma's bean soup. I had it cooking for a couple of hours and couldn't wait to eat it. Unfortunately, I didn't realize if I wasn't cooking with canned beans I would need to cook the beans first. They were so hard we ended up throwing the soup out. It was not one of my best meals.

After that experience I switched over to buying canned beans. I knew they were more expensive, but I liked that I didn't really have to plan that much. I could just grab a can from the pantry and start cooking. But, a couple of years ago someone told me how to cook dried beans in a slow cooker and I have done them that way ever since. Not only do they taste great, I save lots of money too. A two-pound bag of black beans at Aldi works out to be about $.29 for a cans equivalent. I don't think I have ever seen beans for as low as $.29 a can.

If you haven't cooked dried beans in a slow cooker before it really is easy. I like to make around a pound at a time. Then, I can freeze whatever leftover beans I have for another time. Start by washing off your beans. You will want to sort through your beans and pick out any broken beans.

Then put the beans in a slow cooker and add about 6 cups of water for every pound of beans. I like to add a little bit of minced garlic at this time too. A teaspoon or two helps add some extra flavor.

Put the lid on the crock pot and then let the beans cook on high for about three to four hours or on low for about six to seven hours, stirring every 30 minutes or so. When the beans start to get soft, but not mushy take the lid off and let them cook for about 15 minutes more. If you like your beans salted, now is the time to salt them. Because I usually am using my beans mixed in with other things I often skip the salt.

Once they have cooked for an additional 15 minutes without the lid you can turn off the slow cooker. When the beans have cooled a bit you can drain the water from the beans.  You can now use them just like you would canned beans. Add them to a dish or make some soup. You can also freeze them for future use. Let them cool completely and store them in a freezer safe ziploc bag or container. Next time you need some beans for a recipe you can just pull out some frozen beans and let them defrost.

Once you have cooked dried beans in a slow cooker you will be wondering why you ever bought canned beans before. The beans have so much flavor and are over half the price of canned beans. Ditch the canned and try these easy slow cooker beans tonight.

Get my weekly meal planner 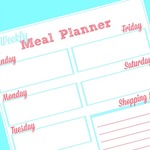 Subscribe (free!) to my newsletter and as an added bonus I will send you the weekly meal planner printable!

Success! Now check your email to confirm your subscription. The password to the library is "cleanfreak" -- copy and paste that into the resource library. https://www.frugallyblonde.com/resourcelibrary Your email confirmation also contains this information.